Analysts Bullish On Bitcoin (BTC) Due To Dropping Volatility

Just days ago, Ethereum World News reported that data from CBOE Global Markets indicates that Bitcoin (BTC) is now less volatile than the publicly-traded stocks of Amazon, Netflix, and Nvidia, which have all outperformed ‘mellow yellow’ since the start of 2018. Data from the Chicago-based institutions have also shown that Bitcoin’s 20-day historical volatility is nearing that of Apple (APPL), indicating that the tumultuous tech sector is dominating BTC in certain departments. 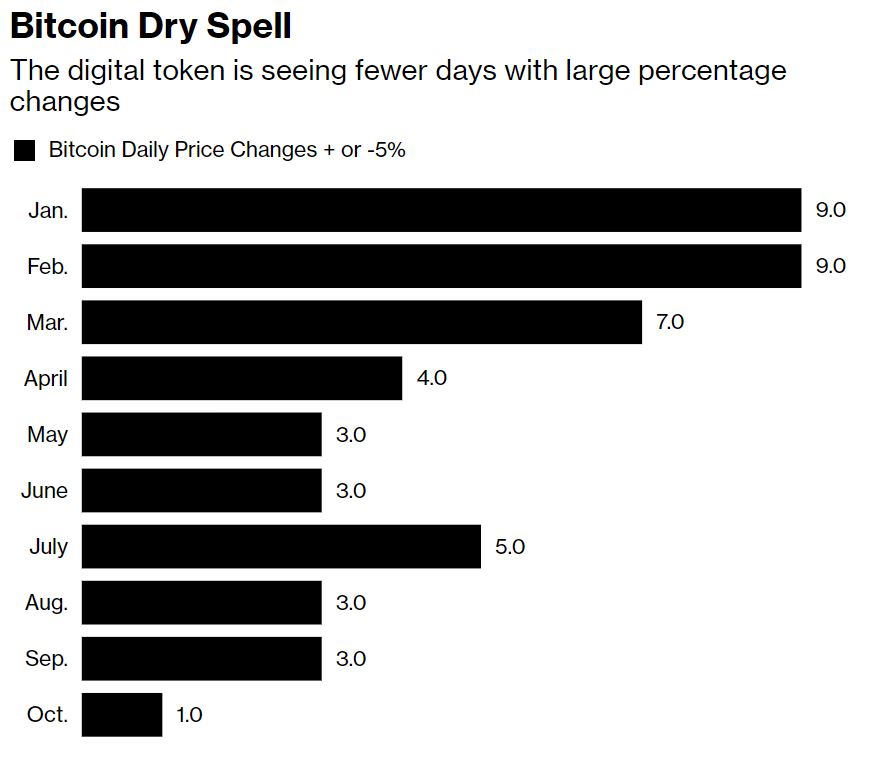 This rapidly dropping volatility of crypto assets, especially BTC, has led a multitude of analysts to make some interesting claims about the short to mid-term future of this budding market. According to Bloomberg, in the past four weeks, Bitcoin has only had one day with a move higher than 5%, compared with nine in both January and February.

Commenting on this data, Mike McGlone, who was formerly bearish on the short-term prospects of the crypto market, pointed out that low volatility levels indicate that speculative investors are beginning to flee this market (likely for marijuana stocks). The Bloomberg Intelligence analyst added:

High volatility is a major factor lessening most cryptocurrency use cases for anything other than speculation.

McGlone went on to note that declining beta, a volatility indicator, indicates that crypto, or Bitcoin more specifically, is likely undergoing a bottoming process, which is something that traders in this emerging market have been clamoring for. The aforementioned analyst wasn’t the only trader to make such a claim, as Charlie Morris of the London-based Atlantic House Fund Management released a similar forecast for BTC to Bloomberg.

In an email, Morris, who works for a Catley Lakeman Securities subsidiary, explained that the crypto market “is calm and in balance,” also adding that speculative interest in digital assets is reaching new year-to-date lows, even if positive industry developments, like the establishment of Fidelity Digital Asset Services and the impending launch of ICE-backed Bakkt, are ramping up.

Alluding to the fact that the bottom is in for Bitcoin, as claimed by a number of industry leaders, Morris added: “given this bear market is now 10 months old and is getting tired, I’d be inclined to be bullish for the next major move.”

While volatility, a technical indicator, has signaled that the cryptocurrency market is nearing a bottom, the arrival of the following positive developments indicates that the fundamentals of this industry are still booming.